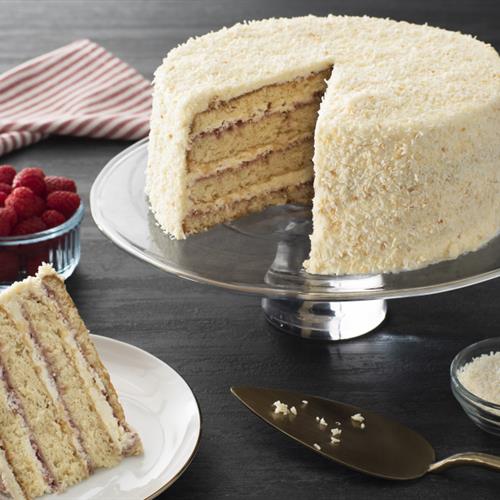 For CAKE: Combine eggs, milk, corn syrup and vanilla in a small bowl; beat slightly and set aside.

Bake 27 to 33 minutes, until golden and toothpick inserted in center comes out clean. Cool 5 minutes; remove from pans and finish cooling on wire rack. (TIP: Place cooled cake layers in freezer or refrigerator for 30 minutes to 1 hour to allow for easy slicing.) Use a sharp bread knife to carefully slice each cake horizontally in half to form a total of 4 layers.

To assemble cake: Place a bottom cake layer on serving plate, cut side up. Carefully spread one third of jam over cake. (TIP: Warm the jam slightly, if needed, for easy spreading.) Sprinkle 2 to 3 tablespoons shredded coconut over jam. Next, spread a thin layer of icing over underside of next layer. Stack the two halves together like a sandwich (jam and icing touching in the middle). Repeat the filling and stacking process with remaining cake layers, jam, coconut and icing, ending with top layer. Spread the rest of the icing over the top and sides of the cake; cover with 2 cups shredded coconut. Refrigerate at least 2 hours or overnight for best flavor. Store cake in refrigerator until 15 minutes before serving.

**To make dried coconut, spread 1 cup flaked sweetened coconut (packed) in a thin layer on a large baking sheet. Place in preheated 275°F oven for 8 to 15 minutes, stirring once, until coconut feels crumbly and no longer moist. It should still appear light in color (not fully toasted). The amount of moisture in shredded coconut varies; bake time will vary depending on moisture content. Cool and crumble coconut into tiny pieces.

TIP: Try this cake with other flavours of jam or preserves, such as apricot.